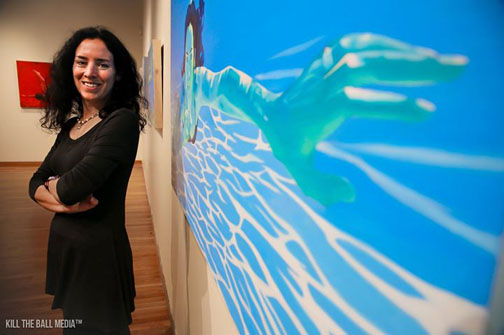 Kat O'Connor, with Hush from the exhibition Luminous Will: Paintings by Kat O' Connor at the Worcester Center for Crafts, photograph by: Joe Santa Maria of Kill the Ball Media.

Co|So is excited to announce that Copley Master Kat O’Connor has curated a show Realism at the Worcester Center for Crafts in Worcester, Massachusetts. Kat O’Connor received a BA in Drawing from Montana State University and an MFA in Painting from the University of Texas at San Antonio. Realism will open on March 12th and the artists included in the show are Ri Anderson, Madge Evers, Lucy KH Kalian, Roger Palframan, CA, Cristi Rinklin and William Scully. (Both Lucy KH Kalian and Roger Palframan happen to be Copley artist members as well.) All of these artists decide to use source material from their worlds to create “otherworldly images.” The result is a collection of work that asks the viewer to question their own understanding of realism, particularly in connection to abstraction. Realism is most commonly understood as the exercise of accepting a situation exactly as it is. In Kat O’Connor’s Realism, it is suggested that all art holds roots in realism (the practice of observing a situation exactly as it is) and it is only the viewer’s (or artist’s) interpretation of that subject matter that renders a work “abstract.” 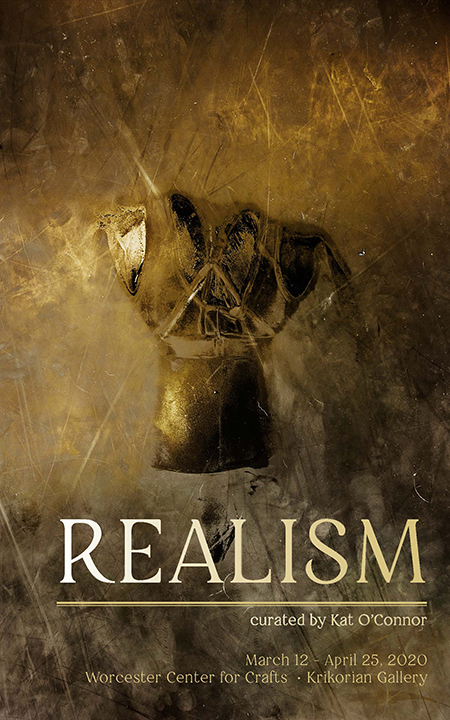 Poster for Realism at the Krikorian Gallery at the Worcester Center for Crafts,

Some of the artists look to our physical world for source material––Madge Evers works with mushroom spores and worms, Lucy KH Kalian draws individual trees, Cristi Rinklin works with landscape, and William Scully uses microscopic images of botanical specimens. Other artists in the show choose to capture aspects of their everyday lives. Ri Anderson works with the body and Roger Palframan photographs close–up compositions of the finish line at the Boston Marathon. The result is a variety of artworks that are all original and arguably both somewhat abstract (due to the artists’ ability to make decisions and create the work itself) but also inherently realistic, due to the artworks’ source. Make sure you see Realism on March 12th to see all the pieces in this show and to decide for yourself how each artwork connects to and departs from your own understanding of “Realism.”

Kat O’Connor recently won 1st place for her painting “Persephone’s Bath” in the Winter Members Show: Full Spectrum at Co|So, on view until April 2nd. Realism will be on view at the Krikorian Gallery at the Worcester Center for Crafts from March 12th to April 25th. There will be an artists’ talk on April 2nd from 5:30 to 7 pm and a closing reception. Click here for the Krikorian Gallery: https://www.worcester.edu/Krikorian-Gallery/

Next : Virtual Sample of the Regional Pastel Show >

Schedule may be altered over holiday weekends.

The Copley Society of Art, Co|So, is the oldest non-profit art association in the United States, with a history dating back to 1879.