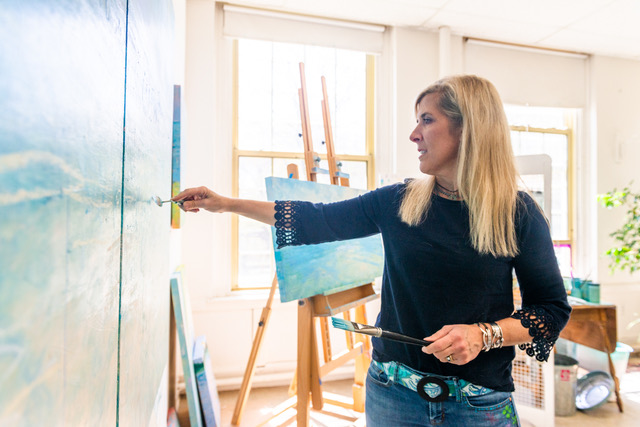 Pictured: Whitney Heavey
When one views Whitney Heavey’s marvelous paintings in oil and acrylic, many on a large scale, one is transported to a seaside or a forest, but the experience goes deeper than the image of nature.  One also cannot help but feel a sense of calm and nostalgia in her abstractions.  Whitney is both professional painter and colorist. She joined Co|So only recently and was in the 2020 New Members Show.
Whitney attributes her love of art and of the ocean to her artist grandmother who in the 1970’s would take her on beach walks on Fire Island (NY), teaching her the importance of observation and the effects of light on color. She learned then of the variety and multitude of blues that can be found in the sea and this has informed her work.  After surviving Non-Hodgkins Lymphoma in 2012, Whitney discovered Wallace J. Nichols’ book, “Blue Mind”. She describes how she learned  “of the surprising science that shows how being near, in, on or under water can make one happier, healthier, more connected and better at one’s work”.

Pictured: Last painting the artist created in her studio before quarantine
According to Whitney, life during the pandemic has gotten “simpler” in a way, as there has been “more time to just paint and to be with family”. Whitney’s regular studio space at ArtSpace in Maynard closed down in mid-March, forcing her to make a studio space in her own home. The pandemic has allowed her more quiet time and the opportunity to stop and observe, photograph and video her surroundings on her runs around her neighborhood. Her sketchbook is full of acrylic studies of varied scenes, all close to home. These sketches are essential starting points for her painting.

Pictured: Daffodils sketch and larger painting created from sketch by Whitney Heavey
This time in her home studio has also allowed for Whitney to experiment more with subject matter.  For example, one sketch that Whitney has transformed in to a painting is that of the Super Pink Moon, a full moon that occurred in April, when the moon was at its closest point to earth. The moon is named in this way not for its pink color but for for the phlox growing at that time. This painting is about rebirth and renewal at a time when humanity is facing some great challenges.

Pictured: Heavey’s colored sketch of Super Moon and finished painting “Looking to the Moon”
In an effort to give back during the pandemic, Whitney participated in Art of the Ride (usually a live event that was forced to go on-line). During this six-week charity event, fifty percent of the sales from her art went to support the Pan-Mass Challenge and the Dana Farber Cancer Institute.  On Mother’s Day, Whitney also donated a portion of proceeds from a hydrangea print to support local charities in Acton and Chatham that are helping mothers and children impacted by Covid-19.
Encouraged to pursue painting by her art teacher (and former architect) Richard Grosvenor while at St George’s School in Newport, RI, Whitney obtained a strong foundation in architectural rendering and traditional landscape painting. She was then able to explore and expand on that foundation in college, receiving a B.S. in Studio Arts from Skidmore where she also studied for a year in Florence, Italy.  Although she did not know it at the time, she struggled with ADHD and she found art provided her with a creative outlet for her energy and passion. One painting professor, a true “colorist” greatly influenced her and encouraged her to “push the boundaries of color”. It was then that she decided to paint the colors on the opposite side of the color wheel when looking at subjects. Whitney says “”there is so much color in the natural world that most people don’t see because they don’t slow down and really examine it”. Whitney cites Fauve artists André Derain and Henri Matisse as painters who influenced her with their bold use of color. She is also inspired by contemporary colorist, Wolf Kahn, and Abstract Expressionists, Cy Twombly and Joan Mitchell.  Whitney says “The aspects of art that I am most drawn to are: color, expression and painterly application”.
Whitney will work on many paintings at once, finding the beginning and the middle to be the most satisfying part of the process. She admits that finishing a piece can be difficult because she is quite “critical” of her work and will strive to refine and rework, sometimes editing further than she needs to, tightening the image more than she intended. She likes to work quickly and on large canvases so that she can stay loose with her brush and be more abstract. Typically she begins with paint, not pencil, and creates an under painting; she will build up from there, push and pull shapes, redraw, scrape and experiment with how the paint is applied and try to keep things large and playful. She will use a variety of tools ranging from brushes and a brayer roller to a palette knife and occasionally pieces of bubble wrap or sandpaper. “Sometimes, I get so into the process of my painting that I am not really looking at how the painting is turning out”. That makes the work “exciting” but also makes the completion of the piece more difficult.
Whitney has been successful as both a prolific artist and a businesswoman, establishing a presence with her website and on social media. She is represented by major galleries in Chatham, MA and Portland, ME and is now at Co|So where she has dreamed of being a member artist since her childhood visits to Newbury Street.
Her advice to young artists is to “slow down, stay open to new materials, subjects and methods of working. Observe the world around you, and most importantly put the hours in and take the time with your work. Paint again and again, until some good stuff happens”.  Also, set up “good business practices early” in terms of being “organized” and being “creative about showing your work” in galleries as well as on the Internet and in partnership with meaningful organizations like Co|So.
Share: